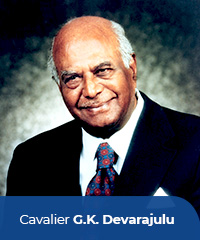 Shri G.K. Devarajulu was a visionary Entrepreneur whose vision transformed Coimbatore into an Entrepreneurial Hub. Born in 1911, he started Lakshmi Machine Works when India was a fledgling nation and through his untiring efforts, raised it to great heights as the years passed. The influence of LMW was felt in the field of textile machinery all over India. He also started the G.Kuppuswamy Naidu Memorial Hospital (GKNMH) to serve the people of Coimbatore to fulfill his father’s dream. Today all his efforts have paid off and have also inspired many Entrepreneurs in Coimbatore.

He also played a pivotal role in setting up of Mani Higher Secondary School, G.Venkataswamy Naidu College, Kovilpatti, and the Kuppuswamy Naidu Sports Trust. To honor his contribution to business and society, he was knighted as ‘Cavalier Devarajulu’ by the Consulate General of Italy in India.

The late Cavalier Dr. G.K. Devarajulu was a visionary entrepreneur, an avowed nationalist and a committed philanthropist. GKD, as he was affectionately known to all, helped pave the way for India’s gaining self-sufficiency in textile machinery manufacturing. GKD was a legend in his own lifetime. Indeed he was a colossus, he strode a period of history when the Indian industry was at a fledgling stage and lived to see it firmly placed on the industrial map of the world. In fact, it is widely believed that the emergence of Coimbatore as an industrial city is largely on account of his individual efforts as a visionary industrialist. 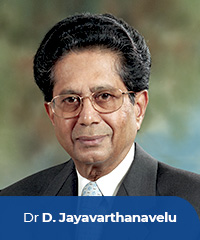 The late Dr. D. Jayavarthanavelu distinguished himself in several sectors like industry, education, healthcare and social welfare. He was the former Chairman and Managing Director of Lakshmi Machine Works Limited, and also the Chairman of Reiter LMW Machinery Limited. He was nominated to the Board of the Reserve Bank of India by the then Central Govt.

Dr. D. Jayavarthanavelu was conferred with Doctor of Letters (Honoris Causa) by the Pondicherry University and also by the Annamalai University.

Dr. D. Jayavarthanavelu’s contribution to the society at large and to Coimbatore in particular, is immeasurable. His focus on Corporate Social Responsibility was unique and was a pioneering effort in social responsibility. His ability to look at finer details and insistence on Quality and Time Management ensured excellence in all his endeavors. His visionary approach and recognition of the abilities of people around him made him a lovable and most respected person. His focus on the downtrodden and his philanthropy made him an extraordinary person.

Dr. D. Jayavarthanavelu will always be held in high esteem and recognized as a doyen in all the fields he was involved in.